In March this year Minister Simon Birmingham launched the national report from the Australian Early Development Census (AEDC). The AEDC is a population measure of how young children have developed by the time they start in the first full year at primary school.  Previous data collections occurred in 2009 and 2012.

After a full time in Reception, teachers complete an extensive survey of children’s development in these five areas: 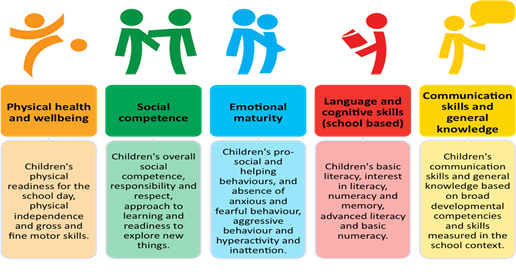 The results for 2012 and 2015 are fairly consistent and show improvement since 2009, particularly in the language and cognitive skills and communication skills and general knowledge domains.

The emerging trends indicate that:

The AEDC will occur again in 2018. In the meantime, how do we use this information to keep improving early learning and wellbeing for all children?

If children’s development is responsive to environmental influences, what kinds of environments and experiences could we seek to provide for all children in Australia?

Further information about the national 2015 AEDC report can be found here.

Powered by WordPress | Hosted by Edublogs | Protected by CloudFlare